This afternoon, I started writing again about the memorial to my dad that I had almost four months ago. Because two years ago they published another essay about me, my father, and the same Arkansas River, I was aiming for this essay to also be for High Country News. Well, as I wrote, things on the page got dark. What was getting written wasn’t what I intended, expected, nor (in a sorta real sense) wanted.

But I kept pen to the pages. Really, what else was I to do? It was rich, mucky, fecund stuff—so what if it was tangenting in a unexpected direction? If the writing had been sunny and upbeat, I wouldn’t have stopped just because it wasn’t minding where I want it to go. Annie Dillard addresses this problem of the writing, specifically the characters, getting away from the writer: “What’s a god to do?”

I’ve mentioned in an earlier post the struggle between taking credit for the writing and being honest about it coming from Somewhere Else. How it still comes down to the gift and talent of being open, of getting out of inspiration’s way. Part of engaging in the dance is choosing when to lead, when to be led.

Too, there’s this: Sometimes there’s stuff that has to be written in order to get to the stuff that’s meant to be in the finished piece. Either that particular thread is en route to where you need to go, or it needs to be said and given its due so that you can move on to the “actual” writing. And, finally, there’s a whole can of worms that gets opened once you start in on a specific subject. There just may be more than a single essay waiting to be written about the Ark, my dad, and me. Unless I stay with the writing, no matter where/how it goes, I’ll never find out; the story to be told will never find its way through me.

Dad, in his element, feeding Canada geese. He and I had our issues; but this is how I prefer to remember my Old Man: this contented, with this relaxed full-bore smile on his face.

Filed under Changing Perspective, Parental Passing, Staying With the Writing

My Farewell To My Dad

Last Friday was the one-month anniversary of my dad’s passing. I’d recently cut my hair from upper-back to nearly-shaved, saving it in a ceramic bowl someone had given me; and I’d decided to commemorate my dad’s passing by distributing the hair into the Arkansas River, which is just a couple of blocks from my apartment. I posted this event on FaceBook, inviting sixty-some folks.

The days leading up to last Friday were overcast, snowy, and cold. Friday, though, was sunny and warm[er]. Still, when the 6PM start-time came around, it was 18 degrees. When I arrived at river, two folks were already there, and then two more joined us, very shortly after. I had my laptop begin playing the John Denver song my dad loved, picked up the bowl with my hair, and made my way carefully down the bank, into the river, and cautiously made my way to the spot where I’d let the river carry my hair (eventually, theoretically) to my folks’ home-city of San Antonio. 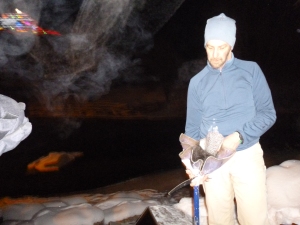 The writer in me realizes there’s a story, here. Maybe, for High Country News, where I’ve already published an essay about Dad and this same river. Maybe somewhere else. At the absolute very least, I need to write this story—having it published is a whole other affair, albeit, one I’ll be pursuing.

Sometimes, our actions have to step in for when there are no words.

Filed under No [One] Is An Island, Parental Passing, Sorting It Out

Tagged as acknowledging you are a writer, Arkansas River, dad, death, memorial service

This’ll likely be another not-about-writing post. And it’s a bit “early,” this being Tuesday rather than Thursday.

This afternoon, my father passed away. It was sudden in that he and I spoke on the phone, last Monday, and he sounded fine. It’s perhaps not so sudden in that he quickly afterward began turning for the worse, winding up in the Emergency Department, and then the ICU, yesterday. He was in and out of consciousness. His kidneys had shut down. His breathing and bp persisted in bottoming out every time he was taken off the oxygen mask.

So, early tomorrow morning, I’ll be driving down to San Antonio. Mom’s still alive, but currently in rehab. Like Dad, she’s been in shaky and fragile health for months and months, if not years. October of last year, we three kids (I’ve one older brother, one older sister) visited Mom and Dad, helping them celebrate their 60th wedding anniversary. They celebrated 61 years while they were both in rehab. Now, there’ll be a whole other round of different anniversaries.

I’m a writer, so there’ll be more on this subject in some form or another. Maybe even here.