After getting home from work, last Sunday, I decided to remove a stack of books from where I’d planned to move a bookshelf. All I intended to do was just that, and maybe go on ahead and move the bookshelf, too. Later, likely days later, I’d also move the filing cabinet and my desk. Turned out that once I got the the bookshelf in-place, I wanted to get the other two items moved while I was at it, so I did. 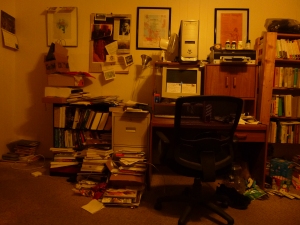 Getting these three items better situated is one of the small steps toward getting writing more front and center in my life. As you can see, I didn’t remove the clutter so much as straighten it up some. There’s still that to be dealt with, along with paring down my possessions and getting what remains better organized. And, too, publicizing my writing and editing, and (of course) sitting at my desk and actually writing.

Sounds like just the project for the upcoming new year.

Filed under Honoring Your Writing and Your Being a Writer

I’ve been at my hospital job for awhile. It’ll be five years, toward the end of February. For a handful of months, I’ve been seriously considering my leaving it. Well, as seriously as not having another job lined up, not even any solid idea of where else to go, will allow. My finances are about to improve, having finally completed debt resolution through a third-party; and the stresses of the job have been increasingly draining me, causing my writing to severely suffer. And regarding my writing, I’m beginning steps toward making it a more prominent aspect of my life. I’ve begun jettisoning my possessions, thereby hacking away at the literal and figurative clutter. I’ll be moving bookshelves and my writing desk around, making a better, more efficient workspace. I’ll be (hopefully) doing some freelance editing, after placing ads in a couple of writing magazines. And I’ll be submitting far more often, and to places that actually pay. I might even dip a toe into copywriting. I’m wanting the work I do to be meaningful, and to more be more closely aligned with my talents and abilities and desires. One of the main things that got me to finally earn my degree over two decades ago was the assurance I’d never have to work in food service ever again. I’ve spent more years cooking after earning my degree than I did before doing so. I’ve grown weary of, as my dad would say, using my back instead of my brains to earn a living. I’m ready to make a change.

From Where I Left Off

Likely another quick and not-about-writing post. But since there are folks wanting to know how things are since last week’s posting, here’s this.

I arrived safely home, last night, after again driving straight through. (Silly me, the internet map said it’d take fourteen hours and change, and I, computer programer and all, still believed it. It was more like eighteen hours.) It was a long slog. Both of the drives were. But I arrived, both times, safe and all in one piece.

I’m still kinda convoluted, emotion and how-are-you-doing-wise. I haven’t had a break down as of yet. But then, when I’ve felt the grief rising, I’ve pushed it down. (Then, while at the hospital, having seen your father’s body undraped in the drawer of their morgue cooler, nor days later while negotiating highway traffic, are the times to allow oneself to fall apart to pieces.) The good news is I’m back to work, tomorrow, so I’ll be occupied. The bad news is the same news.

Oddly, I find myself grateful for so many things. That I was able to drive to and fro unscathed, with no near misses, no figurative bumps in the road. That things worked quietly and simply in positive ways—not that Dad’s death was a positive experience for any of us. Still, in small and private ways, things worked out, when they could have just as easily, maybe more easily, worked out otherwise, as per Jane Kenyon’s poem.

Due to circumstances, I essentially left things hanging in my current life, in order to deal with things surrounding Dad’s death. Now that some of those things have been taken care of, in one fashion or another other, and I’ve returned home, those “hanging things” are now waiting to be dealt with. (For instance, I renewed my driver’s license this afternoon, and early tomorrow, I’ll be back to work as though I didn’t have a full week off.)

Of course, there’s so much to yet to be said. But for now, perhaps it’ll suffice to say I’m starting anew, right where I left off.

This’ll likely be another not-about-writing post. And it’s a bit “early,” this being Tuesday rather than Thursday.

This afternoon, my father passed away. It was sudden in that he and I spoke on the phone, last Monday, and he sounded fine. It’s perhaps not so sudden in that he quickly afterward began turning for the worse, winding up in the Emergency Department, and then the ICU, yesterday. He was in and out of consciousness. His kidneys had shut down. His breathing and bp persisted in bottoming out every time he was taken off the oxygen mask.

So, early tomorrow morning, I’ll be driving down to San Antonio. Mom’s still alive, but currently in rehab. Like Dad, she’s been in shaky and fragile health for months and months, if not years. October of last year, we three kids (I’ve one older brother, one older sister) visited Mom and Dad, helping them celebrate their 60th wedding anniversary. They celebrated 61 years while they were both in rehab. Now, there’ll be a whole other round of different anniversaries.

I’m a writer, so there’ll be more on this subject in some form or another. Maybe even here.